It’s that time of year again, where your facebook feed will be inundated with hundreds of smoothies, photographed in fancy glasses, in snazzy locations and the drinks exhibiting all different colours of the rainbow.

They’re fun, summery and a great go to if you don’t feel like eating.

They also tend to be peoples preffered breakfast choice if you’re running behind time, and you don’t have time to make up those protein bursting oats before work in the morning.

Smoothies have always been labelled as the healthier alternative to eating, as they usually have a variety of fruits and veg in them, and so they’re advertised as a great way of cramming those nutrients in, as drinking a smoothie is ‘easier’ than cooking up a meal and eating it. Which is why a lot of the fad diets that are around these days favour smoothies and shakes.

But are smoothies really all they’re cracked up to be, nutrition wise?

Commercial smoothies (the ones you buy in the shops, ie. Innocent etc) tend to be a bunch of fruit purees blended up with some fruit juice, which basically equals TOTAL sugar bomb.

Which explains why they have an outstanding shelf life on them.

To put it into perspective, Charlie’s ‘fruit fix spirulina’ which is a very green healthy looking smoothie, contains:

23.4 GRAMS OF SUGAR?? That is equal to 6 TEASPOONS OF SUGAR. IN ONE TINY SMOOTHIE. Which according to the American Heart Association, would then be your total recommended refined sugar intake for the day. In one drink.

Also, lets take a look at that protein content. There’s almost no protein in this drink which is a problem in itself when using it as a meal replacement.

Protein is such an important part of the diet, ESPECIALLY when you’re trying to lose weight and MAINTAIN it.

So, if you are subbing in smoothies as meals, even if it’s one per day- you aren’t getting literally any protein from it.

The other issue that I have with smoothies, is that if you actually look at what you’re cutting up to put in to that smoothie, and you stick it in a bowl, and you try eating it, I guarantee you wouldnt be able to/you’d find it hard.

Its much easier to drink food than it is to eat it.

As most people know, when you chew, your body then recognises that you are eating and therefore it can register when it’s full. However, when you DRINK your food, your body doesn’t register that its eating- meaning you will be able to drink more than you would essentially be able to eat.

In saying all of this, I drink smoothies myself sometimes and I DO rate them. When they’re home made and you actually properly portion control a smoothie, they can be really nutritious.

A personal go-to fave of mine is:

– a splash of plant based milk

– a handful of spinach

– a handful of blueberries

By having a smoothie like this one, its not too high in sugar, you’re getting your protein in and you arent cramming more than you can eat into a drink. The oats make it thick and filling too, and you can use more milk if desired to control the consistency.

Whereas the problem I see often in people’s smoothie posts is that they contain lots of different fruits and almost no veg- and yet people just assume that because its fruit- its good for you.

I’ll leave it with you to make your own mind up. 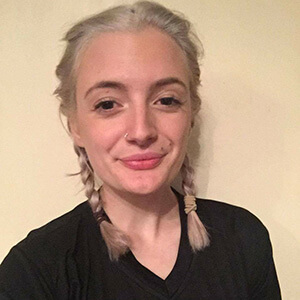